As we close out May and therefore Electrical Safety Month, I wanted to share a bit of information for those not familiar with the training requirements for avoiding electrical hazards. Even if you are familiar with the requirements, allow this to serve as a quick reminder to verify that you are in compliance with your relevant OSHA standard.

For many of those in industry who face the risk of injury from electrical shock or other electrical hazards, you must be trained so that you are knowledgeable of these hazards and how to avoid them. Some occupations have a higher risk due to the nature of their job. In fact, OSHA has detailed out the typical occupational categories of employees that face a higher than normal risk of electrical accident. This includes the following:

*Workers in these groups do not need to be trained if their work or the work of those they supervise does not bring them or the employees they supervise close enough to exposed parts of electric circuits operating at 50 volts or more to ground for a hazard to exist.

For those who are on this list, but do not follow the expection list just above, training may be a necessary need to assist these employees in avoiding electrical hazards and a knowledgeable understanding of the potential of this energy. As you may surmise, proper precautions must be taken to guard against these hazards. Too many employees, too often, are victims of injuries (or worse) because they fail to take these proper precautions to guard against such hazards. Failure to recognize the hazard of contact with energized electrical equipment can be a fatal mistake.

"Qualified" employees must (at a minimum) be able to:

Training for "Unqualified" employees should cover (at a minimum):

What is “Arc Flash?”

Arc flash is a phenomenon that results from an arcing fault, where an electric current strays from its intended path and travels through the air causing an electrical explosion. Between the instantaneous explosion and the resulting radiation and shrapnel, an arc flash often causes violent and serious results;

How Bad Can It Be?

Arc flash exposure is of a violent nature. It causes serious injury and in some cases even death. Some injured employees never regain their past quality of life. Medical care is quite costly, sometimes in excess of $1,000,000. Here are the typical results from an arc flash:

This is a great segue into burns. Most of us have had a sunburn or two, but do you know what a third degree burn is? More importantly, do you know what to do in a situation where you or someone you know has been burned? Remember, the three goals of treating burns, no matter what degree, are to 1.) Prevent shock, 2.) Ease pain, 3.) Reduce the risk of infection. Let’s now talk about how to treat burns at each degree. 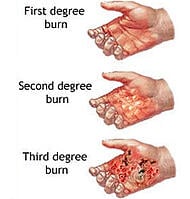 Treatments of burns, by level:

***Remember, never use ice on a burn. It prevents healing by decreasing blood flow and causing a person’s body to become too cold and can cause further damage to the wound.

Ways to Protect Yourself and Your Workers

The good news about arc flash is that there are a number of ways of protecting yourself from the threat of these hazards. In fact, the most effective and fool-proof way to eliminate the risk of electrical shock or arc flash is to simply de-energize the equipment. Here are a few other ways:

Remember, personal protective equipment (PPE) is the last line of defense. PPE cannot prevent all injuries and will only lessen the impact of an arc flash. In many cases, the use of PPE has saved lives or prevented serious injuries so don’t neglect it!

Only qualified persons (one who has received proper training) should work on or near circuits. If you have any questions regarding arc flash, leave a comment or contact STS directly at Contact STS. If you are looking for an NFPA 70E “Arc Flash” course, click the button below to find out how you can become a qualified person through Safety Training Services, Inc.

600BC: A mathematician in Greece named Thales (one of the 7 sages of Greece) is thought to be the first person to discover what we know as static electricity by rubbing amber with animal fur.

Late 1500s: An English scientist, William Gilbert (one of Queen Elizabeth’s physicians) found out that amber was not the only conductor. He added many more substances to the list and coined the term electricity.

Early 1700s: Stephen Gray discovered conductivity and that even water could be electrified. Charles Du Fray, in Paris, performed experiments based on Gray’s work and came to the conclusion that everything and everybody contained electricity (leaving out lightning, ironically).

1752: Ben Franklin conducted his famous kite experiment. In the process, he proved that pointed rods conduct electricity better than balls do and that lightning is a form of electricity. Franklin then invented lightning rods and sold them throughout colonial America.

1800s: Nikola Tesla invented the AC (alternating current) system for electrical transmission. This is what is used today over DC due to its many advantages; the biggest is that you can generate much more power from AC than DC. He also invented motors that run on AC and designed the world’s first Hydroelectric Plant.

The short answer to “What is electricity?” as OSHA states it, is the flow of electrons though a conductor. Since atoms make up any and everything, and electrons are particles that make up an atom, electrons are therefore everywhere. Because of this, electricity is everywhere. We are going to discuss how this affects us and how it is paramount to take a few extra steps in our daily lives and remember a few tips to keep ourselves safe with regards to electricity and electrical apparatuses.

Electricity is conducted through some materials better than others. Returning for a moment to the definition given earlier about electricity being the flow of electrons through a conductor, we know that conductors are materials that loosely hold electrons. Great examples of these are most metals: copper, aluminum, or steel. Other things hold electrons very tightly, these are called insulators. Insulators include: rubber, cloth, plastic, glass, or dry air.

Electricity has a few important properties: 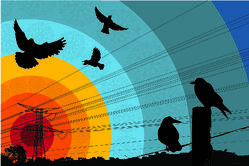 As electricity is a serious workplace hazard, exposing employees to electric shock, burns, fires, and explosions, it is very important to understand how to avoid these risks and learn how to reduce electrical accidents down to 0.

The good news is that these electrical accidents are 100% preventable with proper knowledge and training!

In short, there are only 3 things needed to achieve this.

Electrical equipment used in an office is potentially hazardous. It can cause serious shock and burn injuries if improperly used or if equipment is poorly maintained. Remember, periodic self-inspection should be conducted of your area to help identify and correct electrical hazards and maintain compliance. Follow these tips to reduce exposure to electrical hazards.

Last, but not least, and most of all, insurance is essential. Although it is not an office safety tip, it often helps to have it just in case an emergency occurs. With these safety tips for your workplace and your informed knowledge on the topic of electricity and electrical safety, you can be sure to avoid some of the most common accidents and emergencies of electric shocks and fire!
For more information on STS's NFPA 70E course, click the button below!

With May (Electrical Safety Month) coming to a close, Safety Training Services, Inc. would like to offer 10 tips to remember for those who work near overhead power lines (when working outside):

2. Obey the 10 foot rule. As in, do not work or use equipment within 10 feet of overhead lines. You may feel lucky and think “I won’t come in contact with the power line.” However, the electricity can arc to nearby objects and people and assuming you have enough time to think before being barbequed better than my dad’s grilled chicken, you’ll remember these words.

3. Be careful when working on your roof. That includes cleaning gutters, installing antennas and satellite dishes or any repair work. Oh….and during winter, those holiday lights, be especially careful putting those 250 strands up, thank you Mr. Griswold.

4. Never climb trees near power lines. Limbs & branches can bend or break off and obviously, you can fall off. Didn’t you learn this as a child? 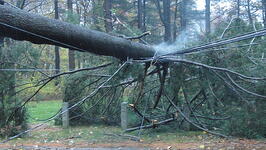 5. Never trim trees near power lines. Leave that to a professional.

6. Always follow safety procedures, no matter how boring and mundane they seem. Just remember, “Working safely may get old, but so do those who practice it.”

7. Assume all power lines are energized. Do not use metal ladders near them; instead use appropriate American National Standards Institute (ANSI)-approved ladders for work near energized power lines. With respect to electricity, one wrong move could be your last.

8. Train yourself/your workers. You/they should be versed in emergency communication and proper techniques for providing aid to someone after an electrical accident.

9. Use Safety Watches or Spotters. Their only duties should be observing the work and communicating with the operator to ensure the equipment never gets closer than 10 feet to a power line. Were you in boy/girl scouts as a kid? Remember the “buddy system!” 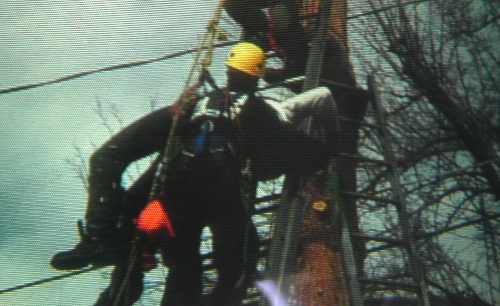 10. Don’t be a hero! Keep a safe distance from any victim who is/was in direct contact with electricity. Call 911 immediately! Do not try to touch victim because you may be electrocuted.

The best way to avoid injury from power lines is to make the choice to stay committed to safety. All rules & regulations are useless unless they’re observed. Safe work habits should be consistent and ongoing.

Remember, as OSHA states it, “no building, equipment, deadline or profit is worth a human life.”

Safety Training Services, Inc. provides appropriate training for several safety topics, including but not limited to: OSHA General Industry, OSHA Construction Industry, NFPA 70E Arc Flash Training, HAZWOPER, Confined Space Entry and Rescue. Call or contact us for a free quote on safety training! Consulting Services, Rescue Services and Equipment sales & rentals also available. Or schedule a visit to come by (or us to you) and see what we can offer your company today!