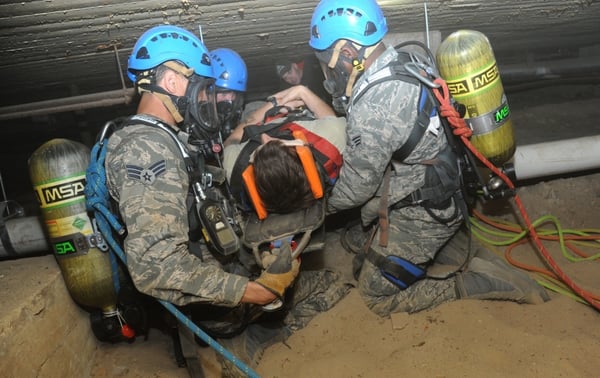 "The appearance of U.S. Department of Defense (DoD) visual information does not imply or constitute DoD endorsement."

In many parts of the United States there are as many standby high angle or confined space rescue teams as there are confined spaces. How do you choose the right team for your rescue plan? Does each team provide the same quality, competency, and proficiency? No matter if you have worked with the same rescue plan for the last ten years, or you are planning for rescue from your first confined space, here are three things you need to know about choosing a rescue team:

1. NFPA 350 states how quickly your team should be able to rescue

Depending on the hazards and design of the confined space, NFPA 350 Guide for Safe Confined Space Entry and Work specifies how quickly your designated rescue team should be able to react and respond to an emergency within your confined space. NFPA 350 categorizes spaces based on potential or actual hazards


2. NFPA 350 states how many people should be on the rescue team

In the industrial setting we often see is a cookie cutter response to confined space rescue needs – always sending the same number of people to the standby site, no matter the hazards of the space and the duties of the rescuers at the scene. NFPA 350 once again shows us what we need:

“The employer should meet with the prospective rescue service to facilitate the evaluations…At a minimum, if an off-site rescue service is being considered, the employer must contact the service to plan and coordinate the evaluations required by the standard. Merely posting the service's number or planning to rely on the 911 emergency phone number to obtain these services at the time of a permit space emergency would not comply with paragraph (k)(1) of the standard.”

It is not the intention to state that a fire department is incapable or will refuse to respond because you did not meet with them prior to your confined space work. As of December 2017 there were over 27,000 fire departments in the United States. (source) and each one of those departments can have vastly different capabilities when compared to the next.

“Only 34% of U.S. fire departments in the United States provide Technical/Specialized Rescue services.”
–U.S. Fire Administration (source)
You may have a full-time, on-call, or volunteer department. Each one will have different response times and each one will have different levels of rescue service – some having no confined space ability, and will rely on a neighboring department or county rescue team. When called, the fire department will always respond, but without a conversation, you may be expecting a service that is unavailable. Remember that the fire service in your community is on a first-come first-serve basis, the first person to have an emergency in your community will receive service. The second person or place to have an emergency will receive service but it may be coming from the other side of the city or from the next closest city if your department is called elsewhere.


For additional resources visit OSHA RESCUE SERVICE REQUIREMENTS where you can view the OSHA and NFPA standards, and download the Rescue Team Evaluation Tool.

Posted by Alex Zielinski on Tue, Sep 26, 2017 @ 11:52 AM
If you're quick and efficient treating and stabilizing patients, building mechanical advantage systems, and evacuating patients, don’t forget: you’re still entering a confined space. Each space will have its own hazards and unique controls in place such as ventilation, PPE, and lockout tagout. Follow these work practices for safe entry and a rescue may never be necessary. Follow these practices in an emergency and you begin to ensure a stable environment for the rescuer.

What does a permit-required confined space need? 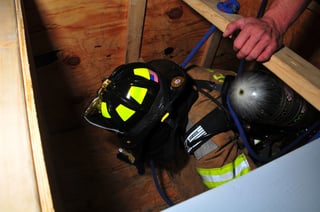 No matter if you are a firefighter, technical rescuer, or industrial emergency responder, the OSHA standard for Permit-Required Confined Spaces states that rescuers must be:

“Trained to perform assigned rescue duties. The employer must ensure that such employees successfully complete the training required to establish proficiency as an authorized entrant…”

The presence of an emergency doesn’t allow us to ignore safety – prior to entering or supervising a confined space all entrants, attendants, supervisors, and rescuers must be trained in the duties they’re expected to perform. No matter their role they must know the space hazards, including the route, symptoms, and consequences of exposure to the hazards in the space.

Get training to build on your team’s role as rescuers, make them competent entrants with a hands-on, interactive confined space entrant program.

After passing the state’s written test and practical skills you may feel like a certified rope technician who can take on the world. Depending on your level of training and experience you might be capable of rigging the world, maybe not. More importantly, do you know what's required to maintain your certification?

In the state of Indiana your Operations or Technician level certification never expires. Currently, from the state, there is no refresher or continuing education requirement. You could train eight hours per week or never touch a carabiner after your class and, in both cases, you remain certified. 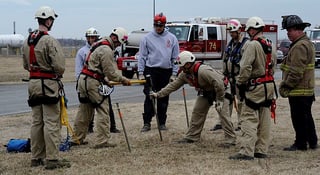 Is the Indiana Department of Homeland Security the only governing body for you as a rope rescue technician? NO!

What standards apply to you as a rescuer in Indiana? MANY!

None of these standards states specifically that a certain amount of training is required to maintain certification or proficiency, only that you need to be competent in specific skills, though it doesn't specify how often it should be assessed or demonstrated. From NFPA 1006 we can infer that as long as you are a practicing rope rescue technician you need to be able to perform those skills.

No matter what NFPA says, it is arguable that NFPA standards are not enforceable by law. Unless adopted by Indiana code 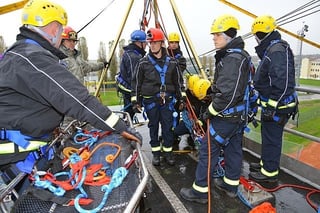 they are not criminally punishable. The counter to this argument is that if your rescue team was negligent and did not adhere to a standard and caused an injury or death, your team may be held liable for not following an industry consensus standard.

Can we be more specific? YES!

OSHA may be misunderstood by some in the fire or rescue service. In a great deal of firefighter or rescue training there is not a lot conveyed about OSHA and its applicability to firefighters in the state of Indiana. OSHA states more clearly an annual training requirement for confined space rescue teams though it is not considered a very robust or demanding standard.

1910.146(k)(1)(iii)(A)
Has the capability to reach the victim(s) within a time frame that is appropriate for the permit space hazard(s) identified;

Again, we see here general provisions that a rescuer must be capable and proficient.

1910.146(k)(2)(iv)
Ensure that affected employees practice making permit space rescues at least once every 12 months, by means of simulated rescue operations in which they remove dummies, manikins, or actual persons from the actual permit spaces or from representative permit spaces.

So, once every 12 months a rescue must be simulated. Also in this standard is the statement that if you had to perform a live rescue in a true emergency you may count that actual emergency as your annual rescue training.

Now, before this article gets too far in too many directions let me summarize:

Only OSHA's confined space standard states that a rescue be performed annually. You need to perform and document hours of training to meet standards but also perform highly technical skills under extremely stressful conditions.

If your company or your department provides rescue services your employees must be prepared. One training drill annually does not create proficient rescuers. From the classes I have taught it is easy to distinguish the students who train monthly or weekly from the students who only train annually. Lacking proficiency in basic knots is a clear indication that you are not prepared for a rescue today.

In conclusion, the National Fire Academy, in its studies and training on initial and established rapid intervention teams (firefighters who rescue trapped or lost firefighters from fires) acknowledges that this is a physically and mentally demanding task. They state that the minimum set forth by applicable standards (two firefighters performing no other task but standby to initiate rescue) is not enough to prepare the rescuer for the stressful conditions they will encounter and state that the standard for rescuing downed firefighters should be viewed as the minimum.

In this same way, standards applied to your rescue teams should be seen as the minimum. Always aim higher because your coworkers and your community demands it. Do you want you rescuing you? 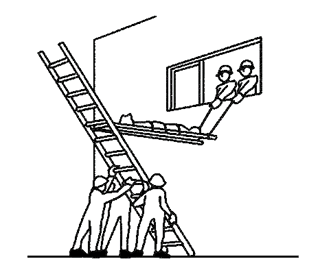 that caught my attention. In the video firefighters are using a ladder, backboard, and rope to move a patient from a roof or second floor to the ground. Depending where you were watching this video there were some great comments about thinking outside the box and using alternative methods to raise and lower patients. There were a large number of comments that were a little deceiving; comments attributed this rescue technique -- a ladder hinge -- to the fire department in the video. It's great to see this technique being used, but by today's standards it may be considered an old school technique. The ladder hinge gets overlooked or forgotten about when so many people are arguing over which friction device is the best. Depending on your location in the country or the world this technique is still taught, relied upon, and used regularly. For another take on a ladder hinge rescue see video link below.

It is not my intention to thoroughly train you to use this rope rescue technique; only to provide a few things to consider in order to operate safely.

Before you tie any knot for rescue consider the patient packaging device -- not all spine boards, litters, and rescue baskets are created equal, nor can they be easily substituted on the fly without some loss of strength. Ensure you aren't exceeding the device's load rating. It may be rated for an 800-1,200 pound patient when carried or used to drag a patient horizontally, but that does not necessarily mean that can rig this patient basket for any type of rescue situation. Injuries or suspected injuries must be considered and protected and we can provide these things by lashing the patient to a long spine board and then lashing patient and board into the rescue rated basket.

With enough personnel to support the ladder on the ground, and rigged with guy lines, the rescuer with the lowering rope may feel that they can control the rate of patient raising or lowering by hand alone. A safety consideration is to secure your rope to the rescue basket and then find an appropriate anchor for a friction device such as an MPD, bar rack, or Rescue 8. Rigging your ladder hinge with one of these devices on the line prevents catastrophic failure of your load should something happen and the rescuer lose control of the line.

As a rope rescue technique, a ladder hinge is a great option available to the fire department or an industrial rescue team. When performed safely and practiced regularly this rescue method can quickly evacuate patients to the ground or to higher elevations. And always remember: before implementation of any new equipment or techniques always seek out training from a qualified instructor.