How can you maintain your team's ability to respond?

OSHA requires that your rescue teams conduct rescue exercises annually. Confined space rescuers must also have access to the spaces, or representative spaces, to which they will be expected to enter. Any standby rescue team must also be informed of the hazards of the space and have the same training for entering a confined space.

According to the CDC, "rescue procedures should be practiced frequently enough to provide a level of proficiency that eliminates life-threatening rescue attempts and ensures an efficient and calm response to any emergency." Industrial rescues do not occur daily but injuries and fatalities do occur.

Meeting OSHA's requirements for rescue will keep your rescue team compliant but will one industrial rescue exercise a year keep your team proficient? 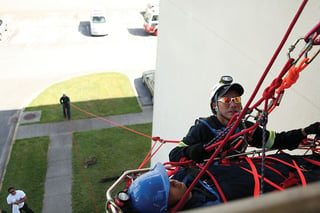 There is no prescribed standard in the U.S. for frequency of industrial rescue training. Technical rescue teams, fire departments, and standby rescue personnel train with varying frequencies--weekly, biweekly, monthly, or quarterly. While your confined space rescue team members may have additional production responsibilites within your day-to-day operation, it is important that they be highly proficient in various rescue methods to extract co-workers; don't let them become a group on paper who simply satisfies a permit requirement.

In its recommendations the fire service on the training of rescuing trapped firefighters, the National Fire Academy states that the physical, mental, and psychological stresses associated with rescue are immense (NFA). The most expertly conducted rescue operation may place team members under extreme stress. Deaths and serious injuries occur in confined spaces and encountering them is something your team must be prepared for.